Social Darwinism is referred to the group of theories which propagate the notion that society exists and survives on the same line as biological natural selection and survival of the fittest, as propagated by Charles Darwin. It was popularized by Richard Hofstadter in 1944. 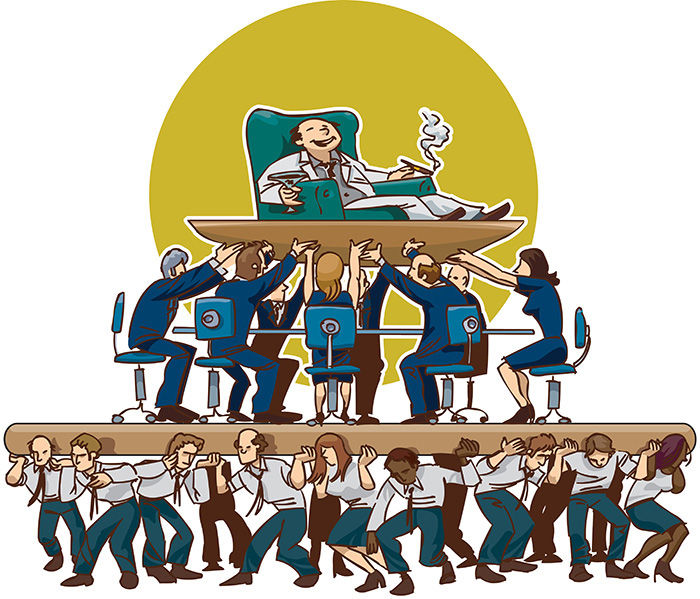 The term ‘social darwinism’ was coined by Thomas Henry Huxley in his review of Darwin’s ‘On the Origin of Species’ in 1860. However, the modern concepts of social Darwinism did not evolve until the 1940’s and 1950’s with the advent of ideologies like fascism. It was used to support laissez faire and political conservatism as an opposition to the rise of fascism. The main proponents of social darwinism are Herbert Spencer, Thomas Malthus and William Graham Sumner. However, none of them explicitly used the term ‘social darwinism’ to describe their work.

Social Darwinism propagates the belief that society, as an organism, survives by eliminating the weak, in this case the poor, while the stronger units, that is, the rich, survive as the fittest. Thus, the rich grew over the poor and the weak. Since there were natural inequalities among people, class stratification was the natural outcome. The rich had control over property and was perceived to possess superior qualities such as industriousness, morality, and temperance. Even though social Darwinists focused on the concepts of natural selection and survival of the fittest, their arguments had very little to do with Darwin’s biological concepts of evolution. In fact, it is used more in terms of sociological and political context.

Social Darwinism and the Ideologies

Social Darwinism was used to propagate ideologies of colonialism, imperialism, eugenics and racism. Since the natural processes demand that the weak be eliminated, state intervention is seen as detrimental to this process. Free trade and competition are important for natural selection. The poor are weak and considered unfit and hence, should be helped in survival because they are destined to die. The rich, who are the strongest, will survive over the poor because they have the means to do so.

Herbert Spencer was a popular figure in the discipline of evolutionary studies in the field of society. He propagated that human evolution would lead to the benefits of cooperation and community. He believed that individual freedom led to an evolving society. Thus, state intervention stunted the natural evolution of society. If free completion is allowed, then the population would result in the best competitors, which lead to an improvement in society and, in turn, the overall population.

Social Darwinism has been severely criticised by scholars for its contribution to fascism and Nazism. Not only has it propagated imperialist and nationalist notions of power and subjugation but its belief in the ‘survival of the fittest’ eventually led to the Nazi policy of pure race and Aryan superiority. Social Darwinists claimed that strong nations where the white people who could conquer and ruled over other nations and thus, expand. Other weaker nations consisted of people who were of ‘lesser breeds’ and had to be eliminated. Thus, European colonialists rarely adopted and bothered to learn the language and culture of other nations.