Democratic peace theory is a theory which proposes that democracies are less likely to engage in war and conflict with other democracies. The low probability of war leads to a structure that would dissuade the use of state-sponsored military violence. Thus, the main focus of the theory is on peace-building rather than war. 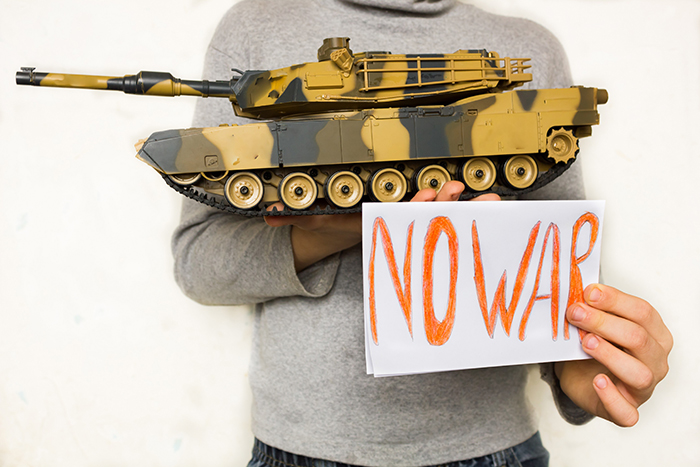 The basic principles of Democratic Peace Theory were laid out by Immanuel Kant and Thomas Paine in the 1700’s. In his essay, ‘Perpetual Peace’, written in 1795. Kant claimed that the public at large would never vote to go to war unless in self defense.

Thus, if all nations were republics, they would refrain from going to war and hence end all wars. Paine, in his work, ‘Common Sense’ in 1776, said that monarchies easily go to war because of pride but republics would not. In 1917, Woodrow Wilson advocated the idea that a global democratic structure would lead to world peace. He used this agenda to justify the entry of the United States into the World War I. In the 1960’s and 1970’s, Democratic Peace Theory became a part of mainstream academia and was studied vigorously. Michael Doyle published two essays in 1983 which garnered more attention to the theory.

Categories that Explains The DPT

There are two main categories under the theory are the structural explanation and normative perspective.

The structural explanation posits that it is the institutions of representative government which make war a poor choice for both the government and the citizens. Since war and its aftermath affect people negatively, the elected officials, who are accountable to the government and the citizens, would look for other viable options as the electorate would otherwise vote the officials out of power. War would only come at the cost of the ruling party being thrown out of power. This view does not accept that all citizens as logical, but rather that the democratic structures would itself give the citizens the power to change decisions made by the government.

The normative perspective posits that that peace exists among democratic nations because they all share the same values. Democratic political culture strives towards non-violent and peaceful means of conflict resolution. This is the attitude shared by all the democratic nations and thus, have a mutual understanding towards each other. They are more willing to sort out their differences and seek peaceful solutions rather than war.

Hence, political ideology is the main determinant in forming allies.

Realists argue that it is not democracy or the lack of it that cause war and peace, but rather, it is the considerations and evaluations of power. It is the alliances between democratic states which leads to effects thought be brought about by democracy, when in fact, they are the result of realist factors.

The main criticism of Democratic Peace Theory is its methodology. The parameters to measure the specifics are highly subjective. Scholars also critique the causal relation between democracy and peace. Realists argue that it is not common values, but rather common interests that reduce the possibilities of war between democracies. Democratic states are more likely to align themselves with other democracies due to common strategic interests rather than domestic political processes.

Thus, in conclusion it can be said that Realists do not consider democracy to be a contributing factor for peace. The structure of the international political system is a major determinant in forming allies and making decisions on war and peace. While it can be argued that stability would come about as a result of the spread of democracy, it is in fact common interests that determine the international political structure.