John R Anderson is an American psychologist was born in the year 1947 in Vancouver, British Columbia.  He is currently working as a professor of Psychology and Computer science at Carnegie Mellon University. Anderson is widely known as a cognitive architect because of his researches and experiments in the field of cognitive psychology. Professor has been also recognized for his works in intelligent tutoring system such as cognitive tutor and served as the president of the Cognitive Science Society during the period of 1988 – 1989. Anderson has presented several papers in the subjects relating to cognitive psychology and honored with many scientific awards including Distinguished Scientific Career Award of American Psychological Association, Benjamin Franklin Medal etc…

CONCEPTACT*(Adaptive Concept of Thought – Rational) is a cognitive architecture. Cognition is the process of understanding or acquiring knowledge and information through thought, experiences and other senses. The architecture made with the framework or model which shows the process and understanding of acquiring knowledge and information. This theory tells us each and every tasks performed by the human beings are considered of several steps and processes. It provides a model or framework of these processes that happens in our mind, the framework or model may look like a programming language. The theory works on psychological assumptions of human nature which derived from numerous scientific experiences and experiments.

The main components of ACT* are

There are two types of modules

Perceptual-Motor modules which take care of the inferences or interactions with real or outer world. This part acts as a gate to bringing in the necessary information and data for reaching at the models.

a)    Procedural memory consists of the knowledge that we uses to do simple things such as removing pen cap or opening car door.
b)    Declarative memory consists of information and facts like there are 24 hours in a day or 7 days makes a weak.
c)    Working memory is part of the long-term memory which more highly activated. 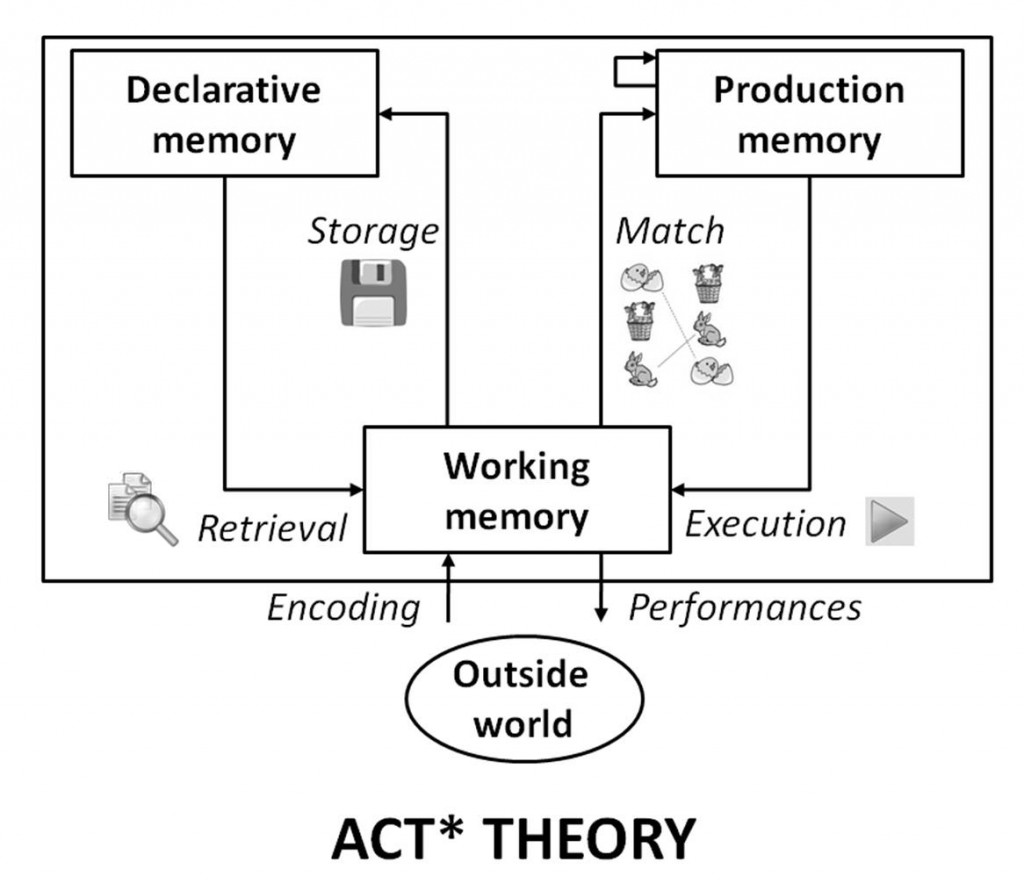 The picture shows how procedural and declarative memory works for performing each and every task.

The theory finds out differences between procedural and declarative memory.

In each module the information where brings in and taking out from one module to another module. These particular buffers systems provide the accessibility to cognitive adaptation thoughts through buffers.

The pattern matcher seeks for a production that matches the current state of the buffers. Only one of these productions can be performed at a specific period of time. That production, when it is performed, can alter the buffers and thus changes are brought into the system. Thus, in ACT* cognition explains as a series of production and a model is made.

Each and every human task can be made into a model by this theory. The models of every person will be different from one another.  Comparing derived model from a person with the standards we can reach the findings. Other important feature of this theory is that it helps to obtain finding in quantitative measures. Most of the times this theory used to find

The theories in cognitive sciences are divided into two the “symbolic” or the “connectionist”. The ACT* theory is considered as a symbolic one and it is classified as such in the books and collections because symbolic approaches describes mind as a product of brain, so as the ACT* theory.

This theory can be used to evaluate the mental capability of the students in quantitative measures.

For finding the answer for the same question the pupil in the higher measurement classes can be given much less time than other pupils. And thus pupil with low measurement can be provided with more time than the time given to other pupil.